Metal is a key component of nearly everything in our lives, from the flatware on our tables to the aircraft that fly us around the world. Metals serve a multitude of purposes and, in turn, come with many considerations in terms of maintenance and other technical challenges. Arguably, the most important and inevitable issue is corrosion. 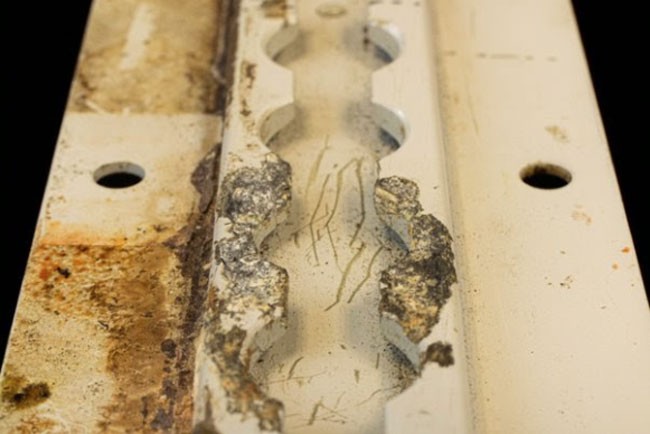 Corrosion is loosely defined as the gradual deterioration of a material's surface through chemical reactions. Though not exclusively reserved for metals, the term is most often applied when talking about metallic components. The corrosive process is affected by a myriad of factors, including environment, product design, storage, cleaning, and mating surfaces. Left untreated, corrosion can be an incredibly risky and costly problem; causing pipes to burst, structures to collapse, fires to ignite, and aircraft class A mishaps.

This guide will help you understand the basics of corrosion as it relates to the use of metal components. It will also provide a detailed summary of the science behind these problems. It aims to give you the knowledge necessary to prevent corrosion by understanding how it happens.

Corrosion is the consequence of an electrochemical reaction. To extract metals from their natural ores, the state of the metallic atoms must be changed by adding energy. As a result, these atoms tend to return to their less energetic state over time; they lose negatively charged electrons to oxygen atoms from the surrounding air, water, or other chemicals.

Losing an electron in this way is called "oxidation." Meanwhile, the atom that gains the electron is said to have undergone "reduction." However, the process typically does not end there; the two charged atoms will form an ionic bond. The overall process is known as a redox reaction, but in common parlance, the metal is just said to have been oxidized.

This oxidation is the source of corrosion and causes extensive damage to the metal surface.

Another type of corrosion is called galvanic corrosion. This occurs when the redox reaction takes place at the interface of two dissimilar metal surfaces rather than a metal and a nonmetallic oxidizer.

With the basic chemistry behind corrosion under our belt, let's consider the key factors that drive this process. 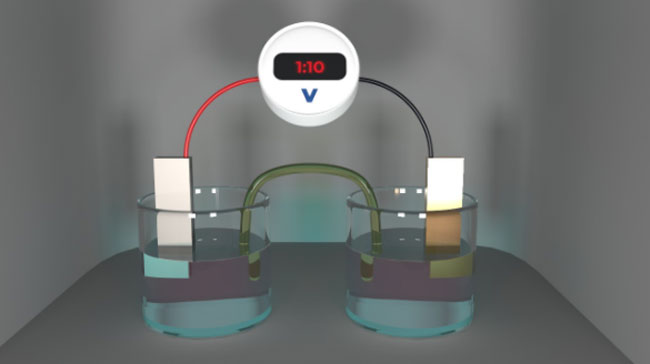 With these parameters outlined, we can begin to understand the galvanic ecosystem in which the electrochemical corrosion process takes place. When oxidation occurs on the metal surface, positively-charged ions are formed. These are also called cations. These cations then flow within the electrolyte from the anode to the cathode, following the potential gradient. Therefore, once oxidative corrosion occurs on one metal surface, the galvanic corrosion process will begin and continue to damage the system. 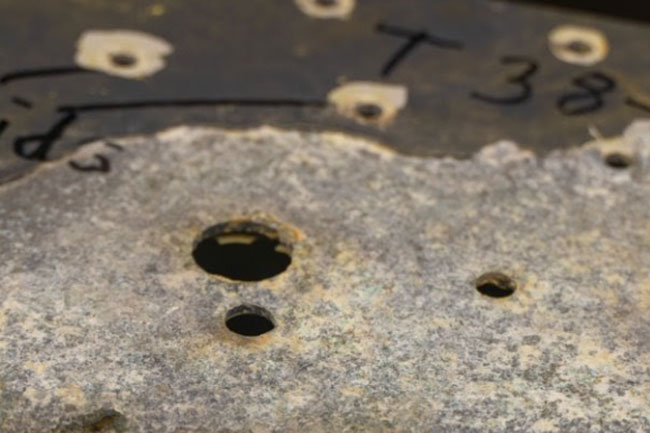 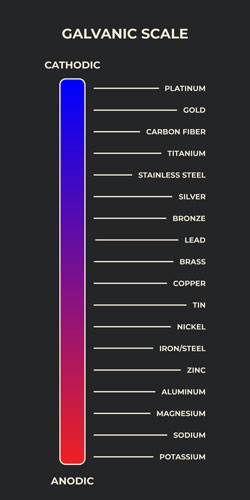 The galvanic corrosion scale is an important chart that allows the user to mitigate corrosive damage by choosing the best material pairs. Some metal surfaces inherently want to interact with each other while others have more nominal interactions and require less preservation and maintenance. From a design perspective, it is important to note that the distance between metallic components in the galvanic scale makes a difference. Metals that are further apart on the scale are more prone to galvanic corrosion because the distance increases the potential differential. On the other hand, this greater distance increases the likelihood of oxidative corrosion within each metal surface. For example, let's look at the scale to the right. Because copper and tin are next to each other, they will be far less prone to galvanic corrosion than carbon fiber and aluminum, which are on opposite ends of the scale. Ideally, these two considerations should be optimized by weighing the contributions of each. When mounting dissimilar metals, it is always a good practice, when acceptable, to apply a sealant of some type to reduce interaction between the metals.

The galvanic table organizes metals according to their reactivity in an aqueous environment, beginning with the anodic metals and ending with cathodic metals. The cathodic metal surface will be more prone to corrosion in a galvanic environment containing different metallic elements. As such, it is important to select an appropriate electrolyte that alleviates or minimizes these effects.

Understanding the basics of corrosion allows you to select materials that minimize maintenance requirements. With the knowledge of the science behind it, you will be able to properly combat corrosion according to your specifications and needs. To learn more about corrosive processes and the ways to combat them, contact an Av-DEC representative today.